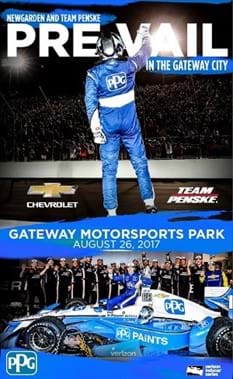 Despite a bit of rivalry in the final few laps of the Bommarito Automotive Group 500, PPG-sponsored Team Penske racer Josef Newgarden recently drove his way to a fourth IndyCar series victory at Gateway Motorsports Park in Madison, Illinois.

Some controversy sparked when Newgarden passed his Penske teammate, fellow racer Simon Pagenaud, tightly going into one of the later laps in the race. Newgarden made a move toward in the inside of the track in his bright blue-and-white No. 2 PPG PAINTS™ car, banging wheels with Pagenaud as he maneuvered through the race-deciding pass for the lead.

Newgarden led the final 31 laps to claim his victory – a fourth win of the season and his second in the PPG Paints car. But at first all was not joyful for everyone, as Pagenaud refused to shake Newgarden’s hand on the podium in Victory Lane, still upset from the earlier encounter. However, Pagenaud eventually softened and the pair first-bumped before posing with their trophies.

The young driver began his career in 2012, and Newgarden earned his first IndyCar win in 2015 at the Honda Indy Grand Prix of Alabama. PPG has been sponsoring Team Penske for 34 years, marking one of the longest and most successful partnerships in all of motorsports.