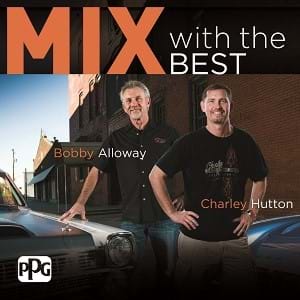 PPG  tipped its hat to color through a display of dazzling paint jobs and world-class custom cars, trucks and motorcycles at this year’s SEMA Show, Nov. 1–4 at the Las Vegas Convention Center.

The PPG exhibit in booth 24601  focused on the unbeatable combination of advanced refinish products, custom builders and boundless imagination.

“SEMA is the industry’s big show, and we like being part of it,” said Cristina Fronzaglia-Murray, PPG manager, marketing communications. “This is where everyone gathers to see what’s new, what’s hot, where the industry is going. And every year the painters and builders amaze us with their creative and ingenious use of PPG products. The PPG booth is open to all SEMA visitors.

Mix PPG products with abundantly talented builders and painters, and SEMA Show visitors had plenty to see in booth 24601, including the following custom-car and racing personalities:

Kenny Youngblood, Youngblood Art/Motorsport Gallery – Youngblood, known as “the father of modern day race car designs,” is one of drag racing’s most talented graphic artists. His gallery showcases the work of other top artists in the field as well as his own work, which also has been featured in numerous motorsport publications and on TV shows including Monster Garage.

Mark Worman and Will Scott, Graveyard Carz – Worman and Scott can be seen on Graveyard Carz, a reality show on the Velocity Channel that focuses on Worman's collision shop, Welby's Car Care in Springfield, Oregon. Worman is the shop owner; Scott is the painter. They work primarily on Plymouth and Dodge muscle cars, and PPG is their paint of choice.

Joey Logano, Team Penske NASCAR Sprint Series driver, and a representative of John Force Racing, the foremost team in drag racing, shared their on-track adventures with booth visitors. Both teams use PPG products for their cars. These notables signrd autographs, offered painting tips and talked about their PPG product preferences in PPG booth 24601.

In addition to some of the people behind them, PPG  showcased an array of stunning cars, trucks and bikes:

PPG also honored Paralyzed Veterans of America (PVA), which was founded by a band of wounded soldiers who returned home from World War II with spinal-cord injuries. PVA is dedicated to providing veterans and people with disabilities, and their families, with everything they need to live full and productive lives.